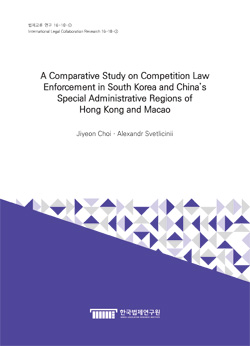 Ⅱ. Contents
□ Competition Laws of China’s Special Administrative Regions of Hong Kong and Macao
○ Hong Kong Consumer Council published a report to recommend the adoption of a comprehensive competition law in 1996, and the Competition Ordinance was adopted by the Hong Kong Legislative Council in 2012.
○ Examples of conducts that are excluded from the prohibited anti-competitive practices include conduct enhancing overall economic efficiency, compliance with legal requirements, services of general economic interests, etc.
○ One of the obvious peculiarities of the Hong Kong competition law regime is the absence of the cross-sector merger control.
○ Hong Kong and EU competition rules show similarities in substantive rules prohibiting anti-competitive conduct and abuse of dominant position with certain differences concerning the determination of dominance or “substantial degree of market power” in Hong Kong Competition Ordinance.
○ Unlike the EU and China, Hong Kong has opted for a judicial system of enforcement for the implementation of its competition law. This means that the Competition Commission does not have the power to impose fines. This power is vested with the courts (i.e. the Competition Tribunal).
○ Macao has not yet made any decisive steps towards adoption of a comprehensive competition legislation. Neither the 1992 Agreement for Trade and Cooperation with EU nor the 2003 Closer Economic Partnership with Mainland China impose any obligations on competition matters.
○ In Macao in the sectors that are not directly regulated by the government, the businesses are free to exercise their own commercial policies subject to the general rules related to economic activity such as company law, contract law, taxation, etc.
○ The Macao Commercial Code has a general clause and the non- exhaustive list of specific situations such as unfair competition acts that provides sufficient flexibility for enforcement; however, judicial enforcement of competition rules remains scarce.
○ Public consultation in Macaohas demonstrated substantial public support for adoption and enforcement of competition rules; it did not produce a clear vision of an enforcement framework such as establishment of a competition authority.
□ Competition Laws of South Korea
○ The shift in the economic policy from the government-driven to the market-oriented in the 1980’s was symbolized by the enactment of the Monopoly Regulation and Fair Trade Act.
○ Multitudinous amendments of the MRFTA were made throughout the history, sometimes triggered by the market situation, sometimes by the government’s policy, and other times as a preventive measures or a curing strategy to fix problematic activities in the market.
○ The government may seem too assertive in its intervention into the market in Korea’s case through MRFTA; however, without fast and hard measures to intrude the already-built monopolistic and abusive pricing system, the MRTFA would not have made any meaningful effect.
○ The purpose provision of the MRFTA enumerates four types of acts that needs to be regulated and/or prohibited; (1) the abuse of market-dominance position, (2) concentration of economic power, (3) undue collaborative acts, and (4) unfair business practices, and all three but the last one (UBP) mirror other leading competition law regimes.
○ Different types of measures were adopted into the provisions of the MRFTA that provides protection for the SMEs: (1) empowering SMEs in their competition against or transaction with large enterprises, (2) placing regulations applicable only to large enterprises and thereby protecting SMEs indirectly, (3) taking into consideration the harmful effects drawn upon SMEs when considering penalties for violations of the competition law.
○ The unfair trade practices, a/k/a fair competition provision, in Articles 23 and 29 MRFTA define the existence of unfair trade practices even without market dominance or anti-competitive agreement.
○ When the combined business is the largest in the sector, and when the combined enterprise’s market share takes at least 25 % or more than the second largest undertaking’s market share, the presumption of market dominance arises under Article 7 MRFTA.
○ The law provides a non-exhaustive list of abusive acts that any dominating enterprise must refrain from conducting, and the list covers numerous forms of abusive conduct.
○ In terms of the implementation and execution of the MRTFA, one of the most outstanding characters is that the KFTC has investigative and policy-making power, that it possesses substantial discretionary authority for enforcing the law when dealing with the complaints.
□ Comparison and Conclusion
○ In terms of maturity of the competition law regime Hong Kong, Macao, and South Korea are very distinct from each other.
○ All three jurisdictions have encountered similar problems on the way of incorporation of competition laws into their legal systems. In South Korea and Hong Kong the adoption of competition law has been a relatively long process with various groups opposing the adoption of competition law. Difference between the opposition in the South Korean on one hand and the Hong Kong/Macao on the other is that it came mainly from the large conglomerates in South Korea whereas the Hong Kong and Macao markets may not have such distinctive large players to form their unified voice.

Ⅲ. Expected Effects
□ While both Hong Kong and Macao are currently in their early phases of the development and implementation of the competition rules, there are several focus areas where they could learn from a more mature South Korean competition enforcement experience: (1) investigatory practices, (2) extraterritorial application of competition rules, (3) treatment of SMEs, (4) merger control.
□ Possible suggestions for changes on laws and policies for South Korea could also be drawn.