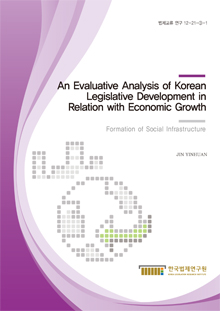 Ⅱ. Main Contents
□ The Relationship Between the Korean Economic Growth and the Land Development
○ Korea has made a range of implementation strategies and put efforts on increasing efficiency for its land development policies in accordance with changes in political ideology of the government
○ Korea’s land development policies mostly concentrated on postwar rehabilitation and reconstruction during the 1950s. With the establishment and implementation of the Act on Comprehensive Plans for Construction in the National Territory in the 1960s, Korea’s land development policies have made a full-fledged start. Policies related to land development were growth-oriented in the 1970s, then focused on balanced development between regions in the 1980s, on decentralized development in the 1990s and on sustainable development considering the natural environment in the 2000s
□ The Progress of the Legislation on Land Development
○ The Act on Comprehensive Plans for Construction in the National Territory enacted in 1963 is the mother law of land planning and the basis of implementation. The Act on the Utilization and Management of National Territory enacted in 1972 classified the land into the urban areas and the non-urban areas. The Urban Planning Act applies to the urban areas and the Act on the Utilization and Management of National Territory applies to the non-urban areas
○ As reckless development has emerged as a social issue since the 2000s, the Korean government legislated the Framework Act on the National Land in order for the land to be managed with the principle of ‘planning first and developing later.’ The Urban Planning Act and the Act on the Utilization and Management of National Territory have been abolished and consolidated into the Act on Planning and Use of the National Land
□ Analysis on Legislation for Establishing Social Infrastructure
○ Land planning laws define infrastructure as basic facilities that create the basis of the national economic activities which include transportation, spatial facilities, distribution and supply facilities, public and cultural facilities, emergency facilities, health and hygienic facilities and environmental basis facilities
○ The Act on Public-Private Partnerships in Infrastructure was legislated for the purpose of easing the government from the burden of investment in building and maintaining social infrastructure and using creativity and efficiency of the private sector
○ It was initially enacted as the Act on Public-Private Partnerships in Social Overhead Capital Facilities in 1998. Then it changed its name to the Act on Public-Private Partnerships in Infrastructure in 2005 and modified to a great degree in order to promote foreign and private investments
□ Improvement
○ Legislation on land planning is a part of planning laws which requires legislators to have accuracy of prediction to a greater extent. Thus, legislators should put more efforts in making accurate prediction and forecast
○ Land planning and the following development projects inevitably bring a big change to the spatial structure of the land and the natural environment. Therefore, sustainable land development must become the basic concept when legislation related to land planning are established
○ Land development projects usually take longer time from planning to completion and cover a wide scope, which sometimes can limit the basic rights of the residents living in the areas under development. Stricter standards are imperative after comparing public interest and private interest
○ Setting up a detail execution plan for a comprehensive land plan should be compulsory in order to strengthen the effectiveness of land planning. Regular evaluation on execution results should be included in part of the related policies and legislation

Ⅲ. Expected Effect
□ This study looked into and analyzed the progress of the policies and legislation on land development of Korea by each period of its economic growth, which would provide a reference material in the aspect of comparative law to lay a legislative basis for the related or similar field
□ It may also be used as a basic reference in exchanging legislative studies or supporting modification of laws and policies