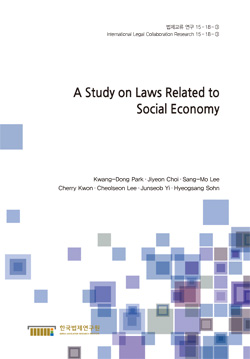 Ⅱ. Social Cooperative
□ Definition of Social Cooperative
○ Legislation
- In Korea, the Framework Act on Cooperatives was enacted in December 2011 and came into effect in December 2012 to help local communities create jobs and provide local welfare services.
○ Qualifications
- The Framework Act on Cooperatives is the governing law for eight individual acts on cooperatives. General cooperatives are for-profit entities as defined under the Commercial Act, while social cooperatives are defined as not-for-profit entities under the Civil Act.
○ Characteristics
- Unlike corporations where voting rights are linked to the contribution (one share, one vote) as defined under the Commercial Act, cooperatives are democratic organizations jointly owned by their members with each member having an equal voting right (one member, one vote). Profits generated from their activities are not distributed among members.
- Compared with social enterprises, social cooperatives require approval from the competent authority, but receive no direct financial support. Cooperatives are a form of enterprise, like a corporation, which social cooperatives may choose to be.
□ Facts about Social Cooperatives
○ Key fitures
- As of December 2014, the number of social cooperatives is 233, representing 3.7 percent of the total 6,251 cooperatives, and the majority of social cooperatives are of multi-stakeholder type arrangements in which business owners, individuals and organizations come together for mutual benefits.
- Four ministries have granted a combined 70 percent of the total 233 counts of approval granted: Ministry of Employment and Labor (51), Ministry of Health and Welfare (44), Ministry of Education (40), and Ministry of Planning and Finance (27).
- The sectors where social cooperatives are predominantly found are education services (67), healthcare and social welfare services (64), business facilities and support services (24), and art, sport and leisure services (14).
- 222 (or 95.5 percent of the total 233 social cooperatives formed) are new, with only 4.3 percent are those having been created through conversion from existing entities.
- Seventy nine, or 33.9 percent, of the total are registered in Seoul, 66 in Gyeonggi and 15 in Gangwon.
- A combined 24,693 members participated in 233 cooperatives at the time of their formation, with a mean average of 106 members per cooperative. The combined capital stock of all cooperatives is 9.375 billion won, which represents a mean average of 40.23 million won per cooperative.
○ Operations
- As of September 2013, the presidents of 73 social cooperatives had worked for research institutes/schools (20.5 percent), political parties/civic groups (19.2 percent) or welfare organizations (19.2 percent).
- Their business areas include supplying processed agricultural products (23.6%) for disadvantaged groups (21.8%), day care for senior citizens (21.8%), environmental services (14.5%) and education and culture services (14.5%).
-They are more reliant on external funding such as member contributions (84.9%), government subsidy (26.0%) or donations (20.5%) than revenue generated internally by their own businesses.
- The average headcount per cooperative is 13.33. The mean average numbers of regular and non-regular employees per cooperative are 5.74 and 5.88, respectively. There are four times as many female employees working in cooperatives than male employees doing so.
- The average monthly salary is 1.57 million won per executive and 1.49 million won per non-executive employee. A combined 91 percent of all employees are beneficiaries of the four statutory forms of social insurance in Korea.
□ Prospects for Social Cooperatives
○ Policy Implications
- Social cooperatives can be used as a means to help support social cohesiveness in the wake of major demographic shifts such as the falling fertility rate and societal aging. They can also function to counterbalance the weakened competitiveness of industries that have traditionally provided large numbers of jobs such as manufacturing.
- Instead of spending public money, the government may choose to use cooperatives to change the link between employment and welfare and ultimately help form self-sufficient social infrastructure.
- Unlike Italy or France where citizens have played a leading role in the growth of social cooperatives, Korea has used a top-down approach in which the central government has enacted legislation to promote cooperatives.
○ Limitations and prospects
- At 230, social cooperatives represent a very small number of all cooperatives, and only a few are involved in the alliance business.
- It is necessary to widen the scope of social services eligible for financial support from the state so that social cooperatives can undertake investment in not-for-profit activities through for-profit ones.
- A framework act on social economy, which is currently being discussed by the National Assembly, needs to be passed to help support economic organizations with similar objects to cooperatives, such as social enterprises, village businesses, self-sufficiency businesses and community businesses, in working collaboratively on mutually beneficial activities.

Ⅲ. Social Economy
□ Background and Implications
○ Background
- The growth of capitalism driven by enterprises made the rich even richer and the poor even poorer. At the same time, many challenges emerged, such as inequality of income distribution, economic instability resulting from alternation between recession and boom, disparity between private and public interest, destruction of nature, and human alienation. To help address these challenges resulting from the structural drawbacks of capitalism, new movements emerged.
- Consequently, voices begin to surface indicating that, with respect to the entire economy, balanced progress in economic, environmental and social values should be the goal instead of higher economic growth in a broad spectrum, and with respect to individual enterprises, maximization of social influence should be the goal instead of profit maximization.
- In this regard, social enterprises with a goal of helping socially disadvantaged groups get on their own feet began to emerge, and the concept of corporate social responsibilities started to proliferate. Today, discussions are under way about social economy that goes beyond social interest and responsibility and touches on fundamental transformation.
○ Implications
-Social economy is a process of redistributing wealth created from market economy based on voluntary solidarity and mutual consideration as a response to the failure of government and the drawbacks of the market.
-Mainstream organizations of social economy are not-for-profit organizations in the third sector such as cooperatives and social enterprises (and not government and market). The proposed Framework Act on Social Economy identifies cooperatives, mutual aid cooperatives, social enterprises and other similar organizations as social economic organizations.
□ A snap shot
○Discussions of social economy depend on the socio-economic circumstances and the history of modernization and political system of individual countries. We can see both diversity and uniqueness as well as uniformity in the diverging discussions.
○Western States
- Social economy started to gain attention again when the welfare model in Europe exhibited a series of crisis symptoms in the 1970s. The globalization of capitalist economies brought tremendous changes to individual countries’ economic structure such as a major shift in their demographic composition and the fall of the myth of full employment. These, in turn, led to widespread unemployment and financial burden on welfare states. Amid such dramatic changes in capitalism, social economy emerged in areas where neither the state nor the market can fill the needs. There was also a highly intentional and strategic need to promote voluntary economic movement in the private sector.
- Social economy in the U.S. emerged in the historic background of charity movements and activities of not-for-profit organizations.
○Korea
- Private groups that emerged in the course of democratization in the 1980s ushered in the start of a new social economy.
- Korea has adopted many systems designed to assist diverse social economic organizations such as social enterprises that have different goals for protection of socially vulnerable groups, an extended welfare safety net or restoration of local communities. The policies and institutions concerning social economic organizations, however, have been adopted discreetly without any connectivity. Yet discussions of social economy started in the 2000s and recently have begun to heat up.
- Over 1,000 social enterprises have been certified nationwide since the passing of the Social Enterprise Promotion Act in 2007, and over 4,000 cooperatives were created within just 16 months after the Framework Act on Cooperatives went into effect in 2012. Recently, a bill entitled “Framework Act on Social Economy” has been proposed to house all these individual acts under a single structure.
□ Legislation on Social Economy
○Proposed Framework Act on Social Economy
- The Framework Act on Social Economy has been proposed by Lawmakers Yoo Seung-min, Shin Gye-ryun and Park Seok-won, respectively. Their bills have many provisions in common such as those regarding development funds for social economy and assistance, and nurturing and operation for social economic organizations.
- Yoo’s bill states “the purpose of the Proposed Act is to help address income disparity, form healthy and sound communities and achieve balanced growth of the national economy by building an integrated ecosystem and developing an integrated implementation system for the sustainable growth of social economy.”
- Article 2 of the bill provides the definitions of social economy, social economy promotion projects and social economic organizations. “Social economy refers to all economic activities aimed at creating social values such as expanded social services, greater availability of welfare services, more job opportunities, and community development through cooperation and solidarity among members and their practive self-innovation and voluntary participation.”
- The article also states “other legal entities or associations formed to help realize social economy or support social economic organizations,” which broadens the scope of social economic organizations. Organizations not eligible under the preceding paragraphs may be accepted as social economic organizations under the bill.
○Framework Act on Realization of Social Values by Public Organizations
- The Framework Act on Realization of Social Values by Public Organizations was proposed on June 17, 2014 with a goal of realizing social cohesion by causing public organizations to take social values into account in addition to economic values when they set up and implement their policies.
○Proposed Special Act on Greater Sales and More Marketing Channels for Social Economic Enterprises
- This bill was proposed in 2013 in connection with social economic enterprises eligible for preferred purchase and greater market access.
□ Benefits and prospect
○Benefits
- Potential benefits include more job opportunities, rollout of values of solidarity in the community, shift in social relationship network and realization of democracy.
○Prospects
-Although social economy has just started to be discussed, expectations of its benefits are very high.
-To make it successful in Korea, it is imperative to remove any overlapping or conflict with existing regulatory framework, have everything required to determine whether and how much it realizes intangible and abstract social values and identify anything that may cause issues in relations with other countries.

Chapter 1. What Is a Social Cooperative? 113